A recent Japanese study confirms that supplementation with DHA (an omega-3 fatty acid) can improve the outcome for individuals with gum disease. According to estimates, gingivitis is the 2nd most common disease worldwide. Estimates are that 30-50% of American men and women have some form of periodontal disease, a serious oral infection that destroys the soft tissue and bone that sustain the teeth. The discovery that supplementing ones diet with omega-3 fatty acids could reduce dental disease holds remarkable promise! 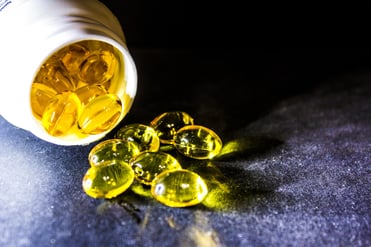 The anti-bacterial properties of omega-3 fatty acids against oral pathogens were previously reported in a research project at the University of Kentucky’s College of Dentistry. According to that study, all three omega-3 fatty acids (EPA, DHA and ALA) limited the growth of Streptococcus mutans, Porphyromonas gingivalis and Candida Albicans, even at low doses. Japanese researchers took the next step to buy involving 46 older men and women in a longitudinal study to determine if there were benefits to dental health if the patients were given omega-3. Participants were given either 2000 mg of DHA or a placebo each day of the study, as well as 81 mg per day of aspirin, a known anti-inflammatory agent. In patients that received DHA, both pocket depth and blood tests measuring inflammation decreased; this was not the case in those who were given the placebo, even though both groups were given aspirin. Further, the researchers discovered that individuals with low levels of DHA had approximately 1.5 times the rate of gum disease than individuals with the highest average DHA levels.


What does this mean to you? It means that, in addition to a commitment to twice-a-day brushing and flossing and twice-yearly visits to our office, taking an omega-3 supplement may very well be in your best interest.

Here is a list of foods highest in omega-3 fatty acids:

If you aren’t fond of any of the foods above or find that you can’t eat sufficient quantities to achieve the recommended 2000 mg of omega-3 per day, you can, of course, supplement your diet with omega-3 in liquid or capsule form, many of which are formulated to avoid any “fishy” taste that might keep you from making this a regular health habit.