There’s a proven connection between poor dental health and dementia. What’s that you say? Yes, it’s true. Here are links to two separate studies on that topic:

The study from Kanagawa Dental College in Japan

You may wonder how it’s possible that poor dental habits could lead to a brain disorder as dramatic as dementia. After all, the primary reason to floss is to remove plaque to prevent it from building up between your teeth and around your gums. Left to flourish, plaque, which is a coating of bacteria on your teeth, can lead to bad breath, cavities, periodontal disease, and even tooth loss. You can’t avoid plaque—everybody gets it on his or her teeth. You can control it and remove it, however, by flossing and correctly brushing. 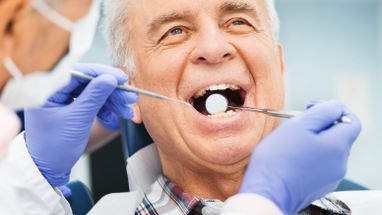 Your body “interprets” plaque just like it interprets a flu bug or a cold germ—it sets up the immune system to attack the problem. This immune response leads to inflammation in the body. Long-term inflammation leads to premature aging, which increases the risk of various diseases related to aging, such as dementia. In the Lancashire study, researchers posited that the bacterium Porphyromonas gingivalis, which is present in gum disease and also present in the brains of those suffering from dementia, may enter the bloodstream through normal daily activities like eating, brushing our teeth or even through dental treatments. The build-up of this bacteria may cause at-risk brain cells to release more chemicals that kill neurons, resulting in changes in the brain as seen in patients with Alzheimer’s and other forms of dementia.

According to Lancashire senior research fellow Dr. Sim Singhrao, there also exists the possibility that the presence of Porphyromonas gingivalis may be the result of dementia and not its cause—in other words, the very presence of dementia contributes to a lack of dental care, which leads to gingivitis.

Whether the lack of dental care leads to dementia or vice versa, we all know that flossing and brushing are essential for good oral health.